skip to main | skip to sidebar

Check out my latest blog:

Lists of the Bizarre, Intriguing, and Informative

According to Jib Fowles, to sell products and services, advertisers appeal to one or more of fifteen emotions:

In addition, I have found, most advertisements also use a visual metaphor, texts which often involve a play on words and suggests the visual metaphor, and, of course, various visual design elements (such as models, props, color, size, shape, and texture). In fact, in an assignment that I give my freshman composition students, I ask them to use the following sentence to structure their advertising analysis essay:

The name of product advertisement in Title of Magazine uses a metaphor to equate the product to an object or experience to which the advertised product is equated and uses such visual design elements as identify specific elements (colors, shapes, props) to sell the product.

To provide a model, I then offer this sample five-paragraph essay, first identifying the thesis sentence and the topic sentences, which I underline in the essay itself:

THESIS: To sell a men's magazine, the Ché advertisement in Commuter World magazine uses a metaphor to equate the product to a “better” dream world and shows a promiscuous young woman approaching a trolley station.

TOPIC SENTENCE 1: The advertisement’s text, “Let’s keep dreaming of a better world,” equates Ché magazine to a place in which beautiful, promiscuous young women are readily available to any man.

TOPIC SENTENCE 2: The female model is shown from behind, so that the viewer is encouraged to see her as an object rather than as a person.

TOPIC SENTENCE 3: The model approaches a trolley station, which symbolizes the connection that she intends to make with the train that will take her to her destination.

I also include a picture of the advertisement. Here’s the result: 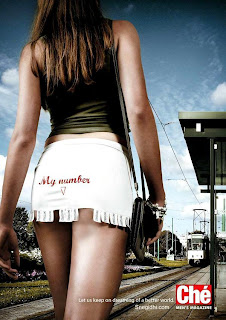 INTRODUCTORY PARAGRAPH: Men’s magazines feature articles concerning topic of interest to their subscribers: alcoholic beverages, sporty automobiles, hunting and fishing, politics, scientific and technological breakthroughs, workplace guidance, travel and tourism, and, of course, dating. Some, such as Playboy, also boast of interviews with the rich and famous and of short stories by popular or even renown writers. There are apt to be jokes and cartoons, too, mostly about sexual matters. The mainstay of such magazines, however, isn’t the news, advice, humor, or fiction, but the photographs of beautiful young women wearing little or no clothing. It makes sense, then, that an advertisement for a men’s magazine, whether foreign or domestic, would appeal to such periodicals’ strongest selling point. If humor can be used to make the sales pitch, so much the better, but, when it comes to promoting men’s magazines, nothing sells as well as sex, as marketers for the European men‘s magazine Ché are well aware. To sell a men's magazine, the Ché advertisement in Commuter World magazine uses a metaphor to equate the product to a “better” dream world and shows a promiscuous young woman approaching a trolley station.

BODY PARAGRAPH 1: The Ché advertisement in Commuter World magazine uses a metaphor to equate the product to a “better” dream world. The accompanying text at the bottom of the advertisement, which is printed in smaller font than the message on the model’s skirt, indicates that the image that the advertisement creates--of a nubile young woman who is available to anyone who is interested in calling her--is a fantasy: “Let us keep on dreaming of a better world.” The advertisement has a playful tone, suggesting that the “better world” to which it alludes would be a fun place to be, and the fun would be of a physically intimate variety. Following this fine print, as it were, is the logo that identifies the product that the advertisement is selling, Ché, a “men’s magazine.” The model seems to represent the sort of fantasy girl that the magazine is apt to feature on a routine basis. By purchasing or subscribing to this magazine, customers gain admittance to the “better world” of fun-loving, available dream girls.

BODY PARAGRAPH 2: The female model is shown from behind, so that the viewer is encouraged to see her as an object rather than as a person. Her face is not shown. Therefore, the emphasis of the picture is on her body, rather than her face, on the physical rather than the personal. She is an object, rather than a person. She wears a simple, green top that exposes her midriff, a charm bracelet, and a white mini-skirt. A small, simple, black purse is slung over her right shoulder. She is the largest object in the picture, and she is the closest to the image’s center, her positioning within the picture, like her size, emphasizing her over everything else that is depicted in the advertisement. Next to the figure of the young woman herself, the most outstanding prop in the picture is her skirt. It is short enough to reveal the lower portions of her buttocks, which are bare, suggesting that she either wears a thong or no underwear at all. The exposure of these parts of her anatomy draws the eye, as does the apparent fringe that adorns the bottom of her skirt, some of the tassels of which are missing, revealing the parts of her buttocks that show. There is something else odd about the fringe: the tassels, which are short, rectangular strips, bear printed text that is too small to read. However, on the seat of her skirt, in red cursive lettering, below which is an arrowhead, pointing downward, is the message, “My number.” This message makes it clear to the advertisement’s viewer that the text printed on the tassels identifies her telephone number. Her skirt is itself an advertisement of the sort that includes, along its bottom edge, a series of tags that are printed with a telephone number to which those who are interested in the product or the service that the advertisement promotes may respond. Essentially, the model is saying, to all interested parties, “Call me.” It is based upon a play on words, alluding to the common phrase, “I have your number.”

BODY PARAGRAPH 3: The model approaches a trolley station, which symbolizes the connection that she intends to make with the train that will take her to her destination. The train represents opportunity. The model is approaching the station. If the viewer were present, he might meet her, and, if he were to join her on the trolley, the train might convey him--or, rather, him and the young woman--to a common destination. The silent text of the advertisement seems to be. “Don’t miss the train!” and represents a call to action, or, in the language of the trade, the closing sales pitch. From a Freudian point of view, the train is also a phallic symbol, which suggests, even more clearly, the sexual nature of the destination to which the young woman and her date will travel, if he calls her and arranges to meet her at the station.

CONCLUDING PARAGRAPH: If advertisements are any indicator of such matters, it seems safe to say that men and women are interested in vastly different types of pursuits. Advertisements in women’s magazines indicate that women are interested in spotless kitchens, a healthy, well-fed family, a clean home, fashionable clothing and accessories, travel, interior design, furniture, and business careers. Men’s magazines’ advertisements suggest that their readers’ interests are fewer by far and simpler: food, sex, and cars. An advertisement for Ché men’s magazine, in fact, makes it clear that many men would welcome as “a better world” one in which women are not only readily available sexually but travel to one’s doorstep, in answer to a telephone call. For most men, the advertisement suggests, life just doesn’t get any better than that!

Yes, You DO Count!